Minnie was born in January 1894 to William Roland Lovegrove (b. 1865, Chaddesden, Derby - d. 1903), and Martha Emma Lovegrove, née Wibberly (b. 1871, d. April 1894).
Minnie lost her mother at only 4 months old, and was brought up by her grandparents, William and Emma Lovegrove, and her father William Roland Lovegrove.
William Lovegrove was a Railway Engine Driver in 1881, and his son William R. was a machine apprentice. They lived on Bloomfield Street (off London Road) in Derby. By 1891 William R. is listed as a soldier in the Royal Marine Light Infantry: Chatham Division (enlistment date 11 July 1882). He must have left in late 1891 or early 1892, as he joins the Midland Railway in Derby in May 1892 as a 'Caller-up'. We're not sure what this occupation is - there is some thought that it is another term for 'knocker-up', or perhaps a 'Caller-off/caller-out who "Loads and unloads trucks in a goods  depot; calls out particulars of incoming and outgoing consignments, from  labels on goods, to goods checkers in preparation for their removal  from platform or wagon by goods porters."

Shortly thereafter, in 1893, William R. marries Martha Wibberly, and Minnie is born the following year. Martha dies the same year and Minnie next shows up in the 1901 census.

In the 1901 census, Minnie is listed (age 7) as a patient at the Borough Isolation Hospital. The address of the hospital is Mansfield Road, Derby. It was also known as Derby Borough Infectious Hospital, and the Derwent Hospital. The hospital no longer exists but was in the area now known as Hampshire Road. It was opened as an isolation Hospital in 1883, and closed in 1985-6, when housing was built n the land.
You can see photos of the hospital on Flickr and Picture the Past.

In the 1911 census Minnie and her grandmother are living as lodgers at 39 Grange Street Derby. By this time Minnie has lost her mother, father, and grandfather (who both died in 1903*). Later that year, aged 17, Minnie starts work at W. W. Winter Photographers.

We can see from the wages ledger that she takes over from Nellie Manning: 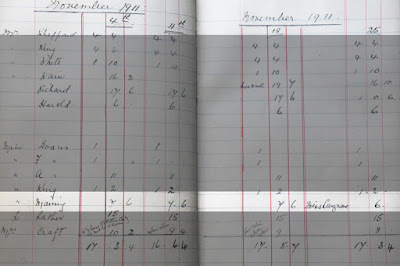 She clearly has bouts of poor health though as illness is listed under her wages on several occasions. 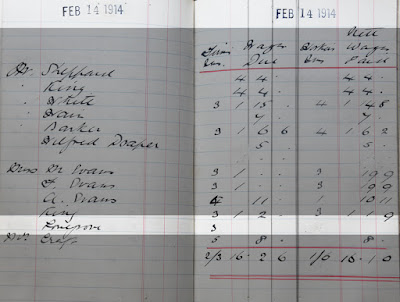 She eventually leaves in February 1914, although she must spend some time in a sanatorium in 1913 as she is referred to in some of the letters (as Cassie) that Bernard Sheppard wrote to William Henry King.
In a letter dated September 15 1913, Sheppard writes, "Miss Lovegrove is out of the sanatorium again. She came in on Friday evening. She looks a big rosy faced country lass compared with what she was before, and has gained about a stone in weight. Can't say when she will return here yet - got to see the medical advisers first."
Just three days later Sheppard writes in another letter to King, "Cassie had left the premises only half an hour before he came in. She had had a bad coughing bout the night before, and seemed a bit low spirited in consequence. Am afraid that poor kid 'aint going to be patched up to mean anything after all."
Sadly Minnie dies in 1914 aged just 20.

While Minnie doesn't have any offspring she does have a number of relatives via various aunts and uncles, and we are hoping to find a possible living relative through these.
Names we are looking for include: George E. Lovegrove; Harry R. Lovegrove; Velsha M. Lovegrove; Florence, Margaret and Jean Sands; and Doris M. Weston, who would all have been cousins of Minnie. Get in touch if you think you might be related!
Email: office@wwwinter.co.uk
Facebook: @WWWinterLtd